Located in and around the famous area called  “Dentelles de Montmirail”, the landscape typicity is made by a rocky bar (between 100 and 600 meters high). Soils are made of clay and sand with limestone. The “Dentelles” appeared thanks to the pressure between the Pyrenees and Alps montains. This is a land of predilection to produce both powerful and fresh wines.
Nights are cooler and the grapes ripeness usually comes in late september.

Traditional wine-making in stainless and concrete vats. Crushed and destemmed grapes. Average of 18 days of vatting with pigeages. Ageing in vats mostly and oak barrels. Bottling after 12 – 14 months.

Between 1 and 8 years. Best to decant if served young. Serve at a temperature of 17°C. 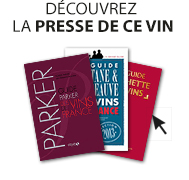